I have been feeling sluggish the last two days and fell asleep this afternoon and had a strange dream. I think I dreamed about heaven, because everything seemed to be ……well…… perfect.

I was sitting in a big ole Lazy Boy in the Moose room at St. Anthony Hall, watching pro football, drinking a cold, frothy Budweiser. Surrounding me, fanning me and rubbing their fingers through my hair was the whole North Carolina Cheerleading squad. That damn goat they have, Ramses was in the room and everytime I 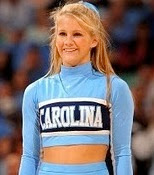 would finish a beer, I’d toss the can to Ramses and he would eat it. Cool! The Chapel Hill cheerleaders were all telling me how wonderful, smart, erudite and athletic I am. Not bad……., but it got better.

The Baltimore Colts were playing the New York Jets in the Super Bowl. Johnny Unitas had just thrown a 99 yard touchdown pass to Raymond Berry (on a rope) and the Colts were winning 113-0. After the game, Joe Namath was interviewed and he was wearing diapers and cried like a baby. After the game, I flipped the channel to ESPN Classics and watched Scott Sisson’s last second 1990 field goal attempt in Charlottesville sail wide right.

The dream continued, Ronald Reagan had been president for the past 100 years. I found myself at a state dinner with the Gipper at my table. Also at our table was Peter Griffith (of Family Guy), Will Ferrell, Winston Churchill, Grace Kelly, Austin Powers, Andy Griffith (no relation to Peter), James Brown, 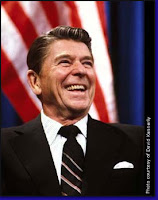 Claudia Schiffer and my boyhood dog, Moonshine who had on white tie and tails and was waxing eloquently about the glory of Rome, quoting Gibbons from memory. The Chapel Hill girls were lighting our cigars and bringing us brandy.

Later I was in the bosum of my family, watching the sun set over the Rappahannock River on the front lawn of my 300 yr old, 36,000 square foot country home, “Robovia.” My son, the Rhodes Scholar and star NBA player was tossing beer cans to Ramses, and my two beautiful daughters, who had not married Yankees (a father’s greatest fear) were taking turns reading Tennyson with Moonshine.

In the distance, down on the pier, Al Green was crooning “Let’s Stay Together” with the Carolina cheerleaders singing backup and swaying to each synapse of melody. As the rhythmic waves lapped up on the beach, a leeward breeze carried the sweet smell of honeysuckle into our senses.
Was this heaven? What else could it be?