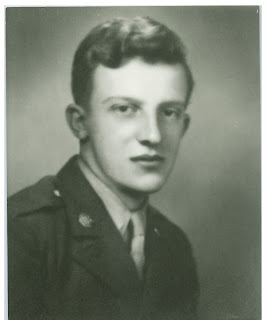 67 years ago this coming week, a 22 year old infantryman, Marston Smith hit the beaches at Normandy. Two years earlier, he dropped out of the University of Virginia and joined the U.S. Army because duty called. He fought in the hedgerows and helped liberate Paris. He was awarded for his efforts and became an officer and on December 24, 1944 he led his company of men in a defense of Bastogne in the Battle of Bulge, marched into Germany and when Hitler was defeated, he immediately volunteered for duty in the Pacific.

He was the descendant of Captain Sylvanus Smith, who “answered the call” and peppered the British at Lexington and Concord, serving the whole war in the Continental Army and ended up with Washington at Yorktown. Like his forefather, Pop was a true Cincinnatus, a man of honor and courage. Yet, as I marvel at my father’s courage, I am even more awestruck by the fact that Pop was not particularly athletic. He was “bookish.” He never rose above the Pee Wee football team at Woodberry Forest. The Army wanted him to work on “the bomb” and sent him to advanced physics classes at the University of Kentucky. Pop, the scrawny, brainy prep school kid, stuck his middle finger at the Army brass, and went AWOL, so he would be shipped over seas and so he could “fight.” When I was a boy, I used to sneak into his closet and look at old snaphots from 1944. He had been transformed. While he was tall, fit, lean and tan, the expression in his hollowed out eyes told the story: he was at war. My whole life, I never saw that “look in his eyes,” but in those old pictures.

My grandparents, Gordon and Ella Smith had four sons who volunteered to fight for their country in WWII: My Dad, Uncle T.C., Uncle Max and Uncle David. Here’s to them and my brother Ken (Vietnam) and many, many others, then and now who have “stepped up” when their country called. Let us remember them all this weekend.